Mo’orea: You’d Be So Nice To Come Home To

Just across the way from bustling port of Papeete is the idyllic island of Mo’orea. The ms Marina visited January 26 and February 5, 2016.

Given the short ferry ride, many from Papeete have chosen Mo’orea as their home, and take the ferry to work on Papeete.

The island itself vies with Bora Bora as one of the most beautiful destinations in the South Pacific. Cruise ships anchor in inlets surrounded by spectacular volcanic peaks. This time the ms Marina dropped anchor in Opunohu Bay:

On Mo’orea travelling in the interior is an option, and the serenity and the majesty of the landscape is not to be missed. Here, the spectacular from one of the island’s pineapple plantations: 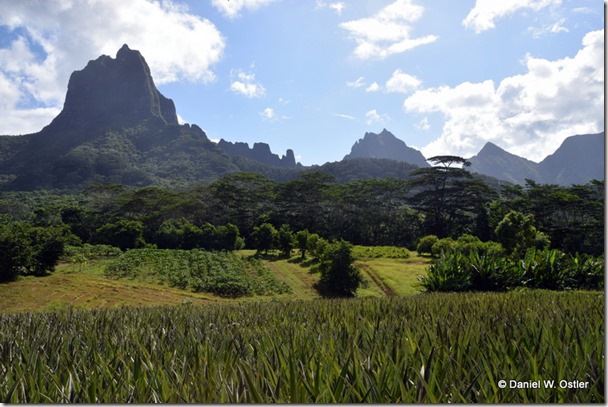 The rather rocky ride up to the Belvédère Lookout rewards the traveller with is a view of both Cook’s Bay (right, with the ms Paul Gauguin at anchor) and Opunohu Bay (left, with the ms Marina at anchor):

Yes, that is the ms Marina, dwarfed by the volcanic spur! 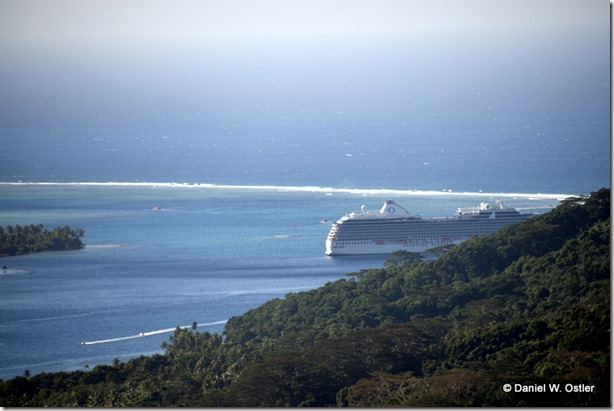 An even rockier ride (definitely not for the faint of heart) will deposit the traveller at the top of Magic Mountain for the best view of Opunohu Bay of all. Just at the horizon line, the ms Paul Gauguin has set sail and is picking its way through the reef:

Rangiroa is an atoll, a fringing reef of a now-extinct island volcano. It represents the sole remaining surface geographic feature following the sinking into the sea of volcanic mountain  following extinction. Provided the reef can grow as fast as the volcano sinks, the atoll will remain a geographic feature of the seascapescape. The ms Marina visited January 22, and February 3, 2106.

Rangiroa was one huge volcano, the remaining fringing reef actually sinking out of view at the horizon because of the earth’s curvature. because of the presence of the reef, a myriad of colours dance on the surface of the water. Too many, as a matter of fact to be captured by a state of the art DSLR camera.

Below: the colours of the atoll, such as I can record them, and the reef snaking towards the horizon:

The reef itself is relatively narrow, a stone’s throw in width.

This shot is from within the atoll, the water in the distance being the Pacific Ocean: 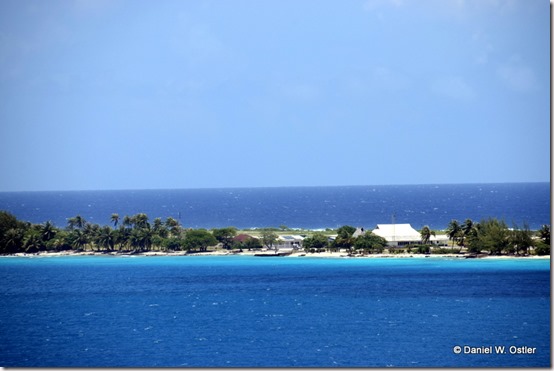 A must-see event amongst passengers is the thrill of shooting the gap in the coral reef used to enter and exit the atoll:

Entering the gap, sandbar to the left, reef to the right:

Passing through, starboard side: 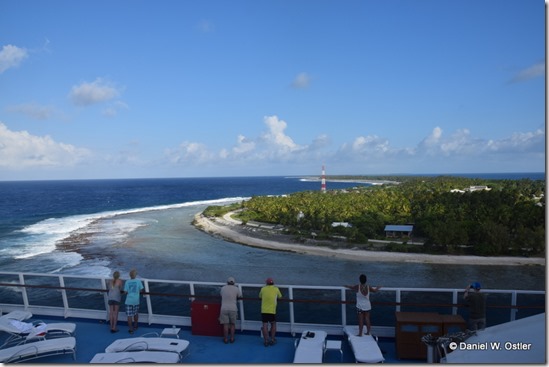 Passing through, port side:

Here is the ms Amsterdam preceding us out of Rangiroa, January 22, 2016:

These captains make it look easy!

Safely outside the reef, the blue on the horizon to the right being inside the atoll, we set sail for Papeete, the reef snaking away to the horizon through a sea and sky of blue: 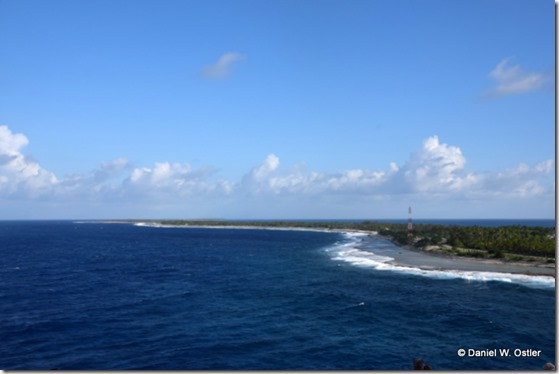 The Marquesas Islands were discovered by the Spanish explorer Álvaro de Mendaña de Neira  on July 21, 1595. The relationship between Marquesians and Europeans has been historically rocky, with this area being one of the last to submit to European rule. The islands themselves, true to this spirit,  remain simply places where people live, not succumbing to the financial lure of the ersatz tourist trap culture. The ms Marina stopped by on January 31, 2016 for an overnight stay.

The Marquesas Islands, located to the north east of Tahiti find themselves in cooler waters brought from the Antarctic by the Humboldt Current. The temperature difference is sufficient to thwart the growth of coral, As a result, there are no coral reefs surrounding the island, as you can see from the above. 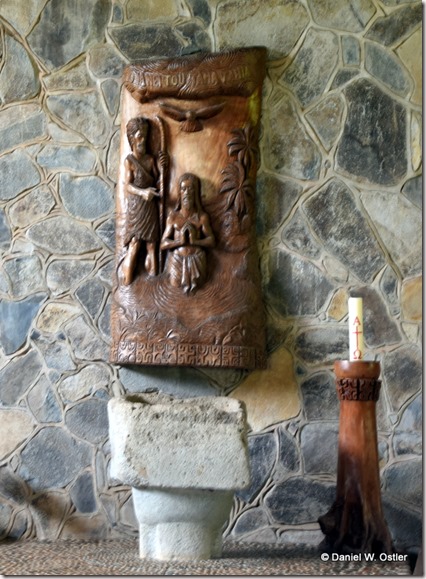 Notre Dame Cathedral is a must-see for the beautiful wood carvings that adorn this 1977 structure. Above is the baptistry. In addition the twelve stations of the cross plus a pulpit are all carved with a unique Polynesian flavour.

Temehea Tohua, a stone’s throw from the cathedral, harkens back to the original spirituality of the islands. This area was reconstructed from artifacts strewn to the winds by well intentioned missionaries, and as a result is probably not archeologically accurate. For our purposes, however, it provided an interesting lens with which to view the past. 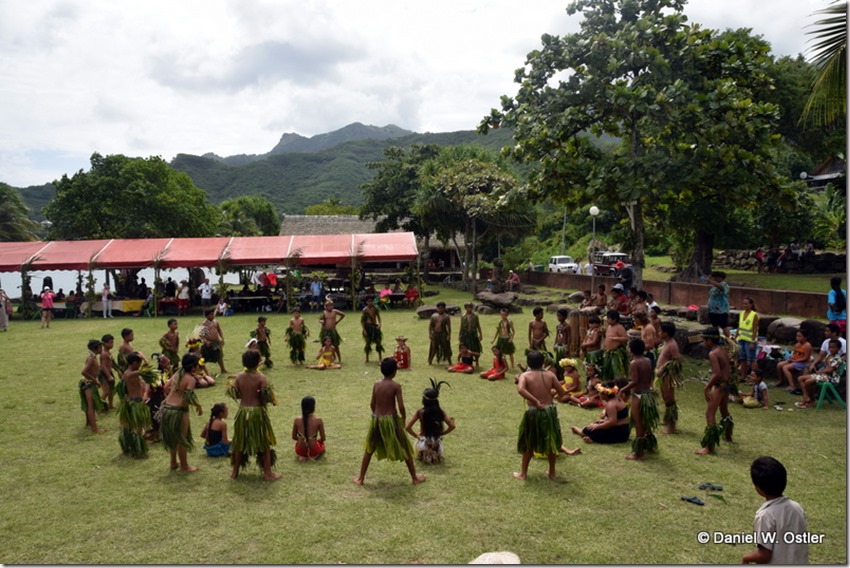 The site has a vital role in the current society, a focus in keeping the Polynesian traditions alive in the youth population. Above, a performance of the dances of their ancestors, the unparalleled navigators of the Pacific Ocean.

It is worth the short cab drive up the mountain for the superb view of the harbour. Above, the ms Marina lies contently at anchor.

A little further along the same road we find the Talpivai Valley, looking much the same as when Álvaro de Mendaña de Neira arrived some 520 years ago!

Bora Bora is perhaps the most romantic island on the face of the earth, the scenery and locale bringing to mind the mythical Bali Hai of the musical ‘South Pacific’. A remnant of an ancient volcano, the lagoon surrounding the sinking volcanic mountain is a wonderful place to go snorkeling. The ms Marina visited three times in January and February of 2016. 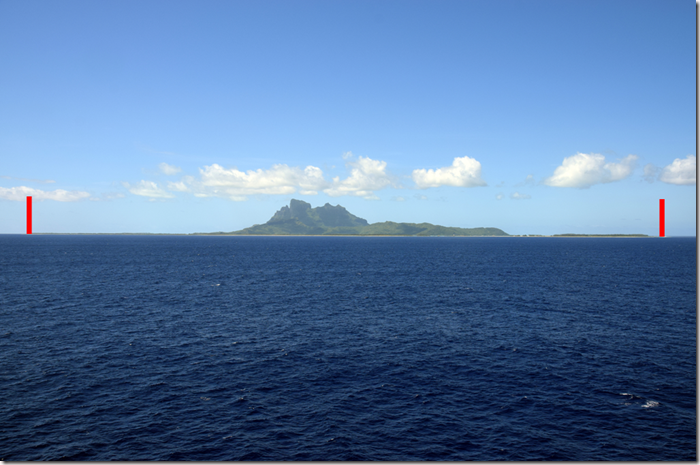 The red markers (inserted by author) indicate the extent of the lagoon around Bora Bora.

About 3 to 10 feet deep, with a white sand bottom, it is an inviting tropical sea adventure for the not-quite-Olympic-class swimmer.

Given that no visit to French Polynesia is complete without a foray under the waves, the obvious thing is to book an excursion and jump in! 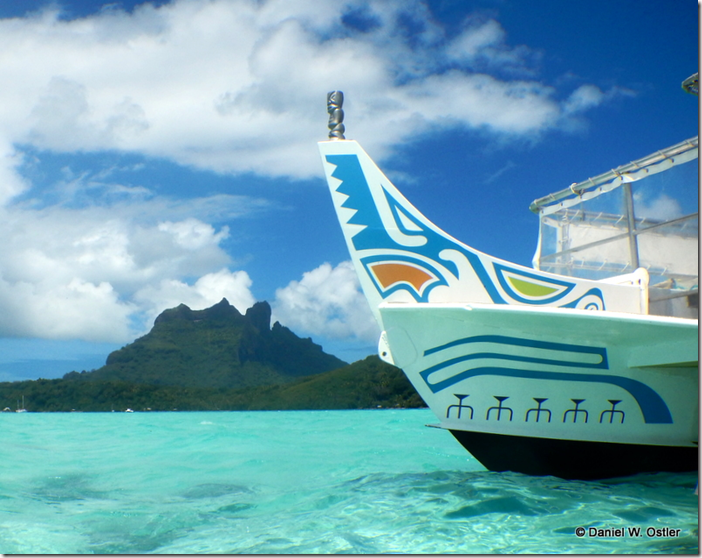 At the dive site, the view is spectacular, the ancient volcanic peak dominating the skyline.

This picture was taken standing on the sandy bottom in chest deep water.

I generally pack my own mask and snorkel, along with a ‘tough’ waterproof digital camera.

Packing your own mask means you get a good fit (having tried them out back home) and clear lenses.

Tour operators had ceased providing flippers for a while, but it seems that flippers are now included again.

Now for our expedition to the world under the surface: 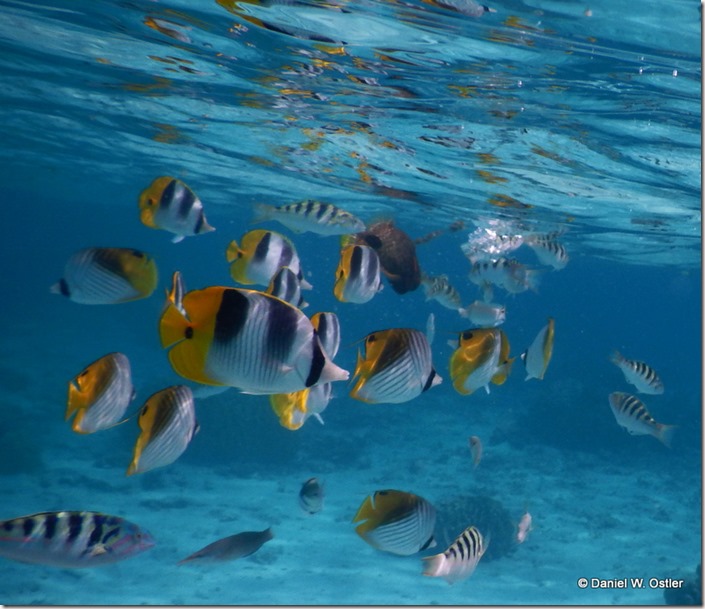 Under the surface, a flash mob of tropical fish greet your arrival. They have the tour schedules pretty well figured out …

Everybody seems up for a good time! 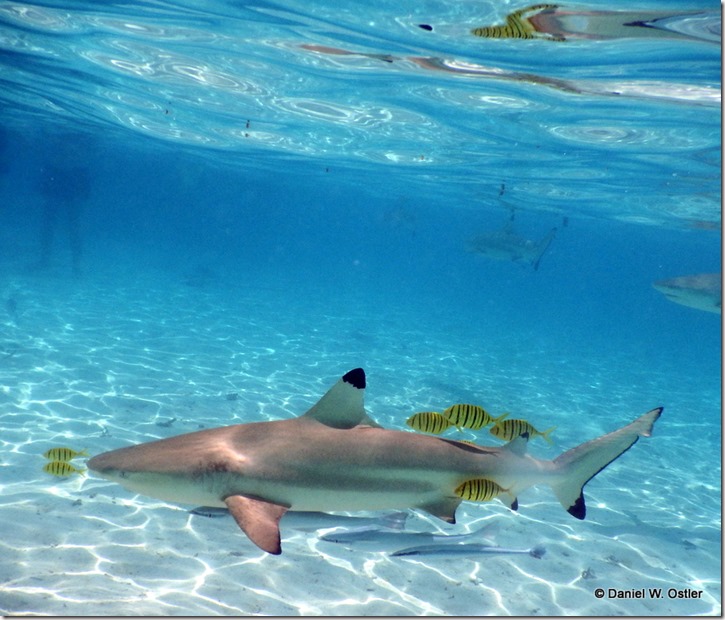 Excursion operators will typically pick locations with black tipped reef sharks which have a pretty good reputation with people around. Animals typically won’t attack anything bigger than themselves, but these are still wild predators and quietly deferring to them is the best strategy. Avoid flashy jewelry, locations where the sharks are larger than you, the surf line in general and, of course, never ever touch them.

Given that this shark has attracted an entourage of three remoras and the six pilot fish (!), it must be the sloppiest eater on the reef!

Meanwhile, sting rays cruise cautiously in our presence, ever watchful they don’t end up underfoot.

All in all, the perfect day.

The serenity, beauty, majesty and perfection of this world beneath the surface is the reason I return each winter.

If ever there was a Bali Hai, it must have been like this!

The Great Emu In The Sky

Australian aboriginals assigned as much importance to the dark areas of the sky as we do to the star formations. Looking up towards the Southern Cross, for example, they saw an emu in the sky where we would see only dark clouds:

This image courtesy of: http://kamilaroianationsidentity.weebly.com/the-dreaming.html

The area that is the head corresponds to the area known colloquially to astronomers as the ‘Coal Sack’ and is located just to the lower left side of the Southern Cross.

This image courtesy of NASA APOD

The complete emu is visible from the ship if you are cruising these latitudes. Stargazing in the antipodes is a marvelous, sociable activity for a clear evening at sea.

The emu is further enshrined in ancient petroglyphs just north of Sydney, Australia. The arrival of the emu in the sky over the emu on the petroglyph was an indicator to the aboriginals of the change of seasons.

During a layover in Sydney, my wife and fellow lecturer Donna ‘The Star Lady’ Giesler took the opportunity to seek out the site and commune with early aboriginal myth and legend. The petroglyphs themselves are not well marked because the authorities don’t want a lot of traffic over them. So, you are left to hunt through unmarked wilderness. It could be anywhere out here:

This necessitated a native guide, and who better than Oceania shipboard guest cabaret artist Annie Francis who was born and raised just a few miles south of the petroglyphs?

Here’s the glamorous Annie, most recently a featured entertainer on the Insignia World Cruise, dressed to kill!

In an age of overhyped mediocrity, Annie is one amazing performer. The real thing!

Meanwhile, here is Annie sporting full ‘Raiders of the Lost Ark’ apparel (red hat), intrepidly tromping over the barren rock with The Star Lady, seeking out the ancient petroglyphs.

We finally stumbled upon the emu, complete with the egg signifying rebirth and the coming of southern hemisphere spring:

It was amazing to find you could walk right up to this history, just as the aboriginals did ten thousand years ago during their rites of spring. This trek was reminiscent of the days when you could actually walk right up and touch the columns at Stonehenge. Not any more. And probably in the near future, not here either. Thanks to Annie, an adventure we will never forget.

The Amazon is exotic by any standard, but a particularly enchanting time to cruise the mightiest of all rivers is during the Christmas season. At this time of year, a new, festive spirit inhabits Manaus by night as the legendary Teatro Amazonas dazzles the eye with its Christmas finery:

The Christmas celebration is complete with the biggest Christmas Angel I have ever seen, plus some shining reindeer!

Of course, there is an Amazonian Christmas pageant …

Luckily for us, the pageant was held in the Teatro Amazonas. A chance to experience a Brazilian Christmas performance in one of the most famous venues in the land. (The Teatro’s schedule is next to impossible to fathom on line, therefore, it is imperative to gather this information first thing when you arrive at the port.)

The ambience is worth the price of admission all by itself, as you can see from the smile on the face of the Star Lady. As a photographic subject, the Teatro just won’t fit into most cameras, and really requires a fisheye lens. On other occasions we have attended smaller samba-oriented concerts where the audience sat on stage looking past the performer out towards the beauty of the theatre. In many respects this is the best of all possible worlds

The Christmas pageant includes (what else would you expect in Manaus!) the meeting of the waters. Here we have the Rio Negro on the left and the Rio Solimõe on the right:

The actual meeting of the waters looks like this. These photos were taken just to the east of Manaus, Manus being at the top left of the picture. The clear darker tea-water on the right flows from the Rio Negro, while the beige, silt-colored water arrives from the Rio Solimões. This meeting is not so open-armed, the two flow in parallel for a stretch owing to differences in density and composition. 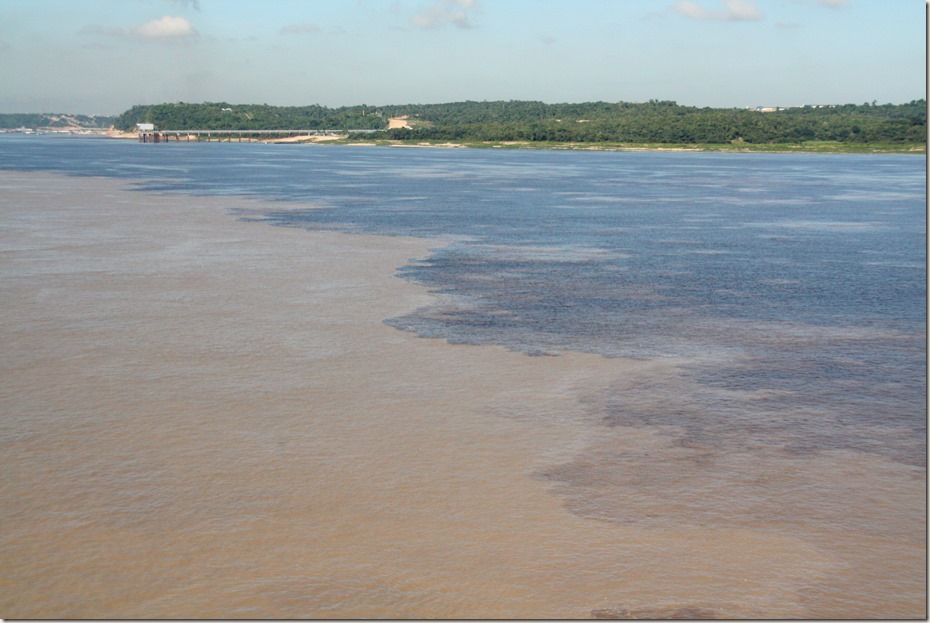 On our way back to the ship, the families of Manaus stroll in Praça São Sebastião 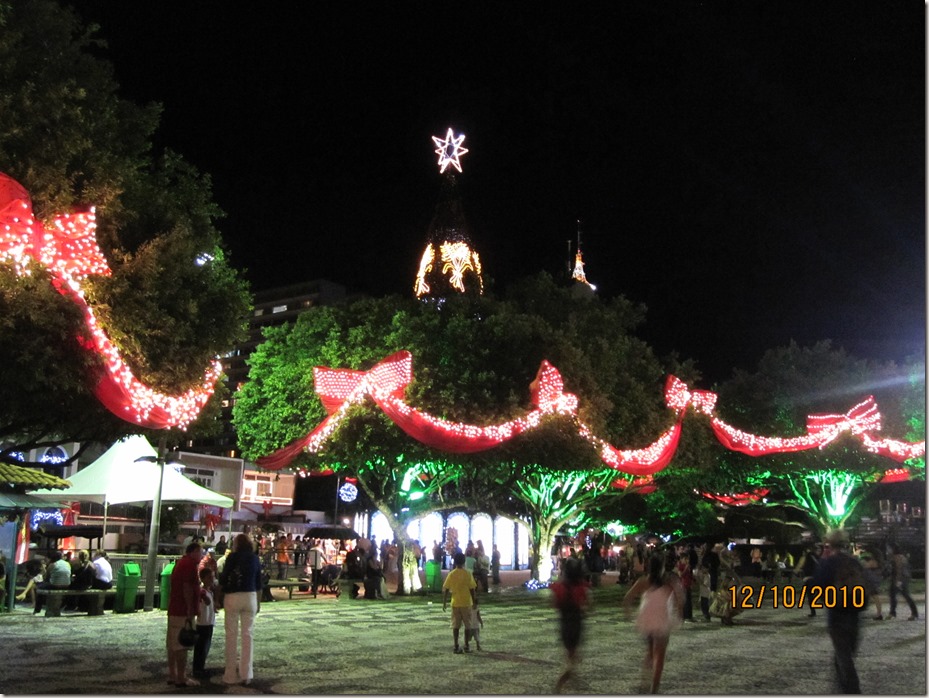 … and Santa makes an appearance on a rooftop! 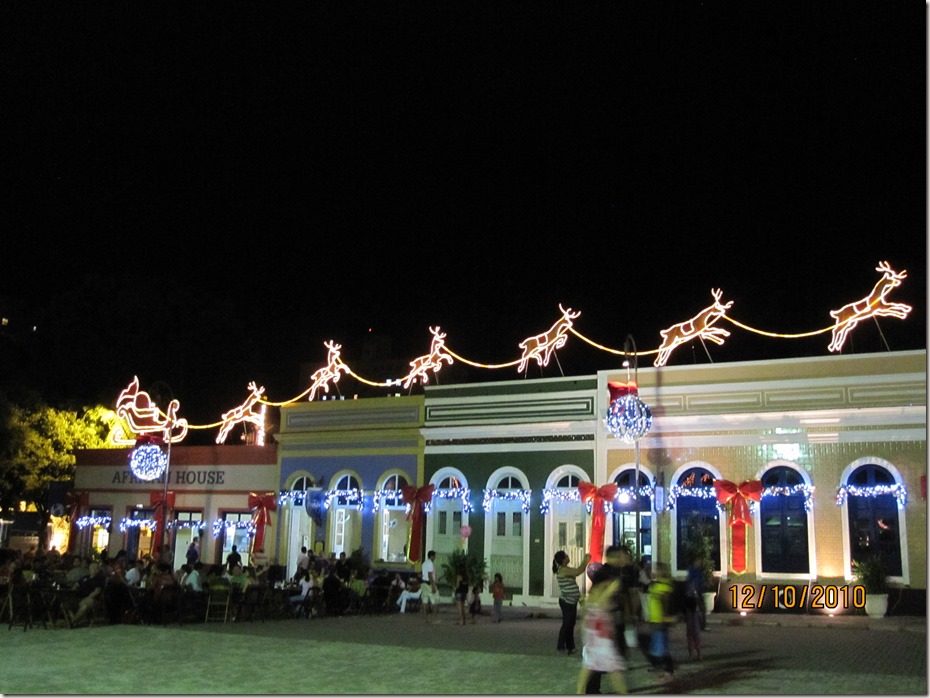 All in all, a magical Christmas evening, fully 900 miles up the Amazon River, just a few miles from the equator!